You are here: Home / OUR SPIRITS / Mathilde Liqueur

MATHILDE LIQUEURS, THE RECIPES OF YESTERYEAR

Mathilde fruit liqueurs are handcrafted French spirits produced from our cherished forefathers’ recipes. Today, Maison Ferrand painstakingly oversees the production of Mathilde liqueurs and strives to transmit its ancestral savoir-faire, year after year. The farmers who grow the fruits for Mathilde are guided by traditional farming techniques and harvest only the freshest fruits at their peak ripeness to ensure we capture the most palatable flavors.

The result is a fancy liqueur from France, wonderfully adaptable for mixing in cocktails, using in baking and cooking like our grandmothers did, drizzling on fruits and desserts, mixing with soda water and so many more variations.

The production technique for each Mathilde Liqueur is specific to its particular fruit variety. For Mathilde Pêche, Mathilde Cassis and Mathilde Framboise, the liqueurs are made from infusions of fresh fruit to extract all of their aromas and flavors. For Mathilde Orange XO, the peel of the fruit contains the best flavor and aroma, so we do an orange peel infusion. Likewise, Mathilde Poire acquires its typicity by the distillation of its ingredients in pot stills.

Mathilde liqueurs are entirely natural – no stabilizers or preservatives are added, ever. 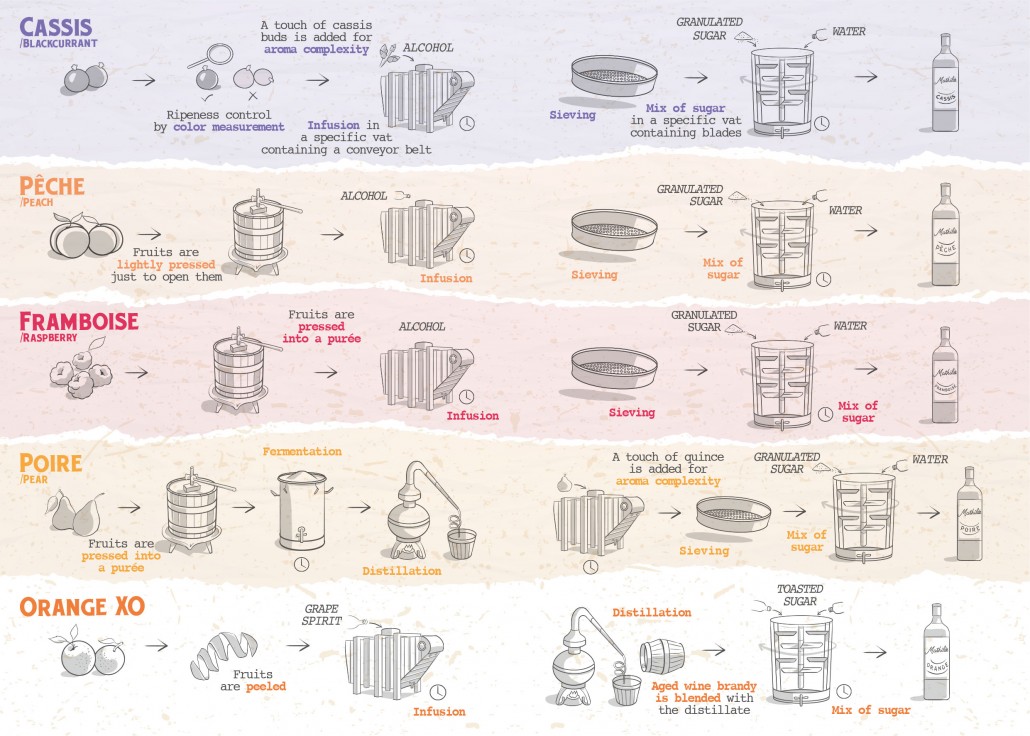 The vine peaches used for Mathilde Pêche are small, with a tough skin and moderately soft, white flesh with a particularly rich aroma. They are considered to be the most flavorful peach variety. Vine peaches are incredibly juicy, despite their small size, with an intense and seductive taste. We only use vine peaches cultivated in France that are hand selected to ensure their freshness.

The peaches – skin, flesh and pit – are macerated in alcohol. The entire peach is used to extract as much of its taste and aroma as possible.  A small amount of sugar is incorporated and water is added to bring the liqueur to proof and round out the liqueur’s distinctly pleasing palate.

Cassis has been referred to as the “Elixir of life” since the 18th century. Cassis liqueur has been made across several regions in France for decades. Some of the finest blackcurrant berries are found in Burgundy and are called Noir de Bourgogne, and we use those as well as berries from the Loire Valley, called the Royal de Naples.

Noir de Bourgogne blackcurrants have excellent aromatic qualities and are considered the tastiest blackcurrants to eat. We also use the Royal de Naples, which have a soft, sweet flavor.

We use the Bon-Chrétien Williams pear, also called Bartlett, to make Mathilde Poire. When ripe, it boasts a golden skin and a very tasty and juicy flesh. In order to extract as much as possible from the pears, we press the fruits into a juice that is fermented before the final distillation.

The pear distillate is then enhanced with a touch of quince, a pear-like fruit with an intense aroma. This particular step intensifies the pear flavor. A one-week maceration process ensues that, in turn, produces a fresh and luscious pear liqueur.

Three varieties of raspberry are used to make Mathilde Framboise. The first, called Lloyd George, originates in Scotland and is particularly well known for its berry fruits. The other two berries, both from Burgundy, are the Rose de Plombières and the Violette de Boux.

The berries are pressed into a puree and are then added to the alcohol base for maceration. The Lloyd George raspberries are used primarily for their bright color, while the intense aromatics mainly come from the berries from Burgundy. We find that this blend of the three varieties produces an exquisite complexity.

The recipe for Mathilde Orange XO dates back 200 years. Sweet orange peels are first macerated in a grape spirit and then distilled. A refined and aged brandy is added to the orange peel distillate and the spirit is then aged before bottling.

The result is a liqueur with a refined nose, with an intense orange aroma and a hint of vanilla. The flavor is powerful, the aromatics are potent and the body is rich. The spirit gives remarkable length on the finish and an overall voluptuous, round taste. 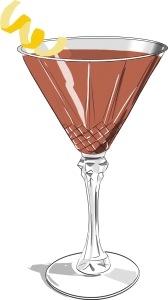 The Pick Me Up 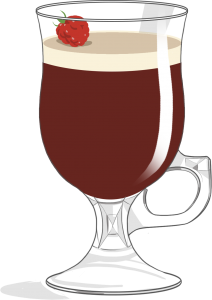 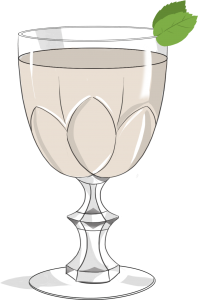